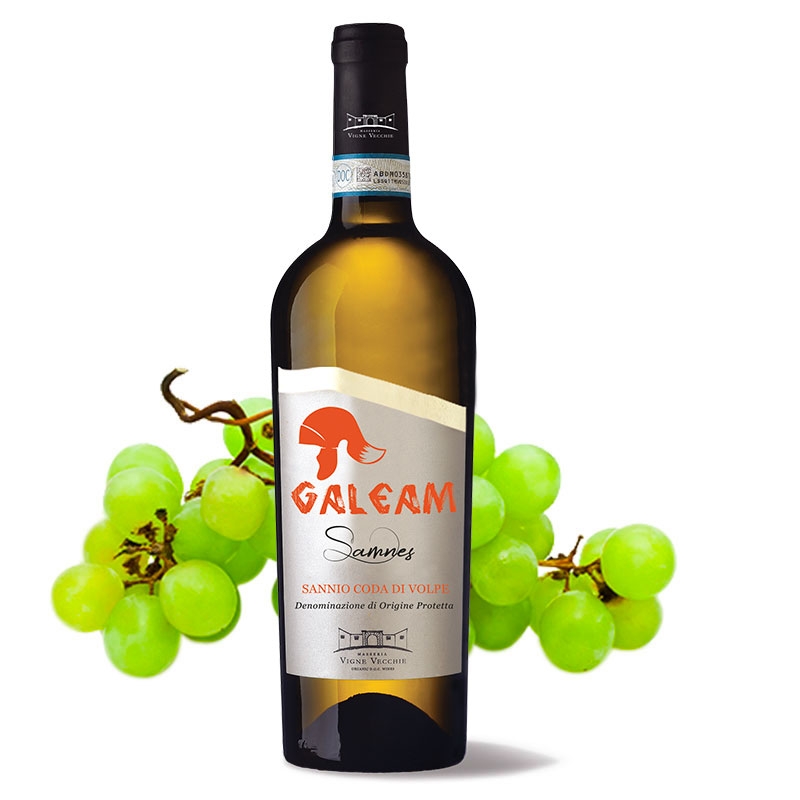 Dedicated to our Coda di Volpe in purity, typical grape of the Sannio and bunch of apical shape similar to the tail of a fox, Galeam recalls through a war accessory the audacity, the wit and the value of the Samnite people.

From the Latin "galea", a macedonian type helmet used in the Sannio, initially made of leather, then metal, was worn by the Sannita warrior in coordination with a splendid armor, a streaked knitted tunic and well-made shoes, tended to give greater emphasis to his athletic build.

Galea Cristata, a chiselled conical cap with a paraguance and surmounted by a tall, thick plume, gave greater imposition to the figure of the bearer called pinnirapi (captain of feathers) from the adversary. In fact, on the sides of the black helmet, which welcomed feathers of bird of prey such as those painted on burial tombstones found in Paestum (5th century BC) and today they are kept in the National Museum dedicated to Posidonia Paestum and Heraera del Sele.

Livio, as well as Seneca and Suetonius, writes of these Samnite crested gladiators, in 310 BC, in a clash with the Romans, reported serious serious, so that the Romans and their allies from Campania, made purchases of arms and armor: "dressing with those uniform the gladiators, who animated their games and their feasts, granting them to keep the name of Samnites ".

In 264 BC, when they established the first gladiatorial games, the Romans adopted the same type of equipment, and the Samnites, gladiatorial slaves recruited for the occasion, dressed with the opulent armor of their ancestors and maintained the use of helmet with a huge crest and feathers (galeam).

The same Roman legionaries, even in the imperial age, protected the head with a helmet (galea cassis) very similar in use to the Samnites, consisting of a simple cap but also equipped with a cover for the nape.

With a deep straw-yellow color, with golden, crystalline shades and of good consistency. Fresh for acidity and dry, with a good structure, persistent with fruity and floral flavors.

* subject to variability according for each year

Did you know that we ship to over 24 different countries